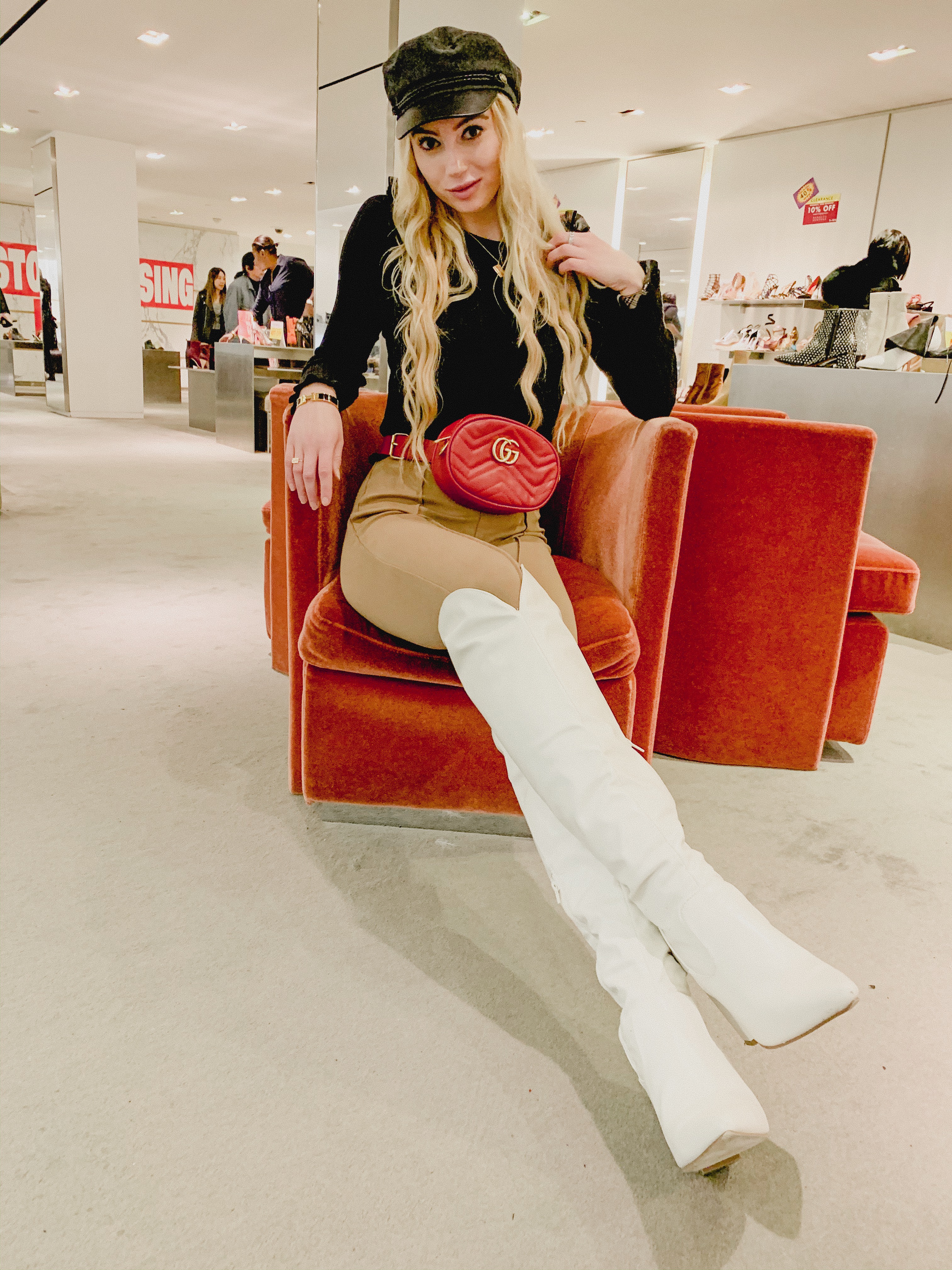 Farewell Barneys New York | The Rise, the Fall & the Aftermath

· All departments, even the fixtures were for sale. See what I found on major clearance! ·

It is no secret that retail has met its match with the internet years ago, but it was still a shock to see the "everything must go" signs here.

For fashion lovers globally, this store closing is also a story to learn from in terms of vision and innovation. These two things ultimately became the death of Barneys and has also been the culprit for many other luxury department stores that have also filed for Chapter 11. Read my farewell to Henri Bendel in NYC as well.

Saks Fifth Avenue is keeping Barneys alive within their storefront:

As Barneys waved goodbye to its shoppers a year ago, it marked an end of an era for high fashion. The iconic department store that once welcomed Carrie Bradshaw and Andy Warhol filed for bankruptcy for the second time in August 2019. It is crazy to think that just a few months prior to this I was also walking into the Lord & Taylor Flagship store closing sale.

Following the bankruptcy, the retail chain closed doors to 15 of its 22 stores from Chicago to Las Vegas to Seattle. Authentic Brands Group is currently the owner of the luxury specialty store that became the victim of high rents and online competition.

As Barneys followed the footsteps of Henri Bendel, Lord & Taylor, Neiman Marcus, Ralph & Russo, and many more, it indicates a wave of change in the retail and luxury shopping universe.

A Brief History of Barneys

In 1923, Barney Pressman pawned his wife’s engagement ring for $500 to open a men’s discount clothing store. Barney Pressman combed through auctions and liquidation sales to find the best clothing and sold them at a lower price than his rivals while bearing the slogan: “No Bunk, No Junk, No Imitations.”

The retail store started its journey to becoming what it was today in the 1970s when it transformed itself into a luxury clothing store. It opened a men’s store in the World Financial Center to court the Wall Street shoppers to its high fashion clothing from designers such as Giorgio Armani, Pierre Cardin, Christian Dior, and Hubert de Givenchy.

The retailer that introduced Armani to Americans expanded its boundaries to women’s clothing in 1976. The store moved to its current 230,000-square-foot location in Madison Avenue in 1993 to become the largest store in New York City. Soon afterward, Barneys began to open department stores outside Manhattan, including Chicago, California, and Las Vegas.

The Fall of Barneys

After being accused of many controversies such as racial profiling and labor issues, the upscale clothing retailer with once-famously haughty salespeople has fallen without grace for different reasons than its scandals. However, the fall of the Barneys did not come as a surprise.

The combination of high rent and online competitors were the last nails in Barneys’ coffin. In January 2019, its Madison Avenue flagship rent almost doubled up to $30 million. It only added to the demise of already falling luxury retailers as they failed to market towards millennials and Gen Z shoppers. Additionally, they were unable to see the rise of e-commerce as an opportunity for growth. Even they joined the online business game a little too late than their rivals such as Nordstrom, Saks, and Neiman Marcus, as well as digital-only upstarts, they still failed to gain much traction.

“My favorite stores were Bendel’s, Barneys, and Bergdorf’s,” said Helen Sant’Andrea, 67. “This is now another great store going by the wayside. I told my millennial daughter here, ‘You have to stop buying online! You have to go to the stores and look at the merchandise! Shopping used to be something to do, an experience.”

Authentic Brand Group, the current owner of Barneys and other intellectual properties, plans to convert the iconic Madison Avenue site into “a pop-up retail experience, bringing together an eclectic curation of boutiques, art, and cultural installations and exhibits, and entertainment that fosters creativity and community.” ABG also plans to liquidate the merchandise and license the name to Saks Fifth Avenue. While the city filled out with red-and-yellow signage announcing the liquidation sale with up to 35% discount, the Sex and the City generation women refused to come to the sell-off as they found it too sad. The store that once made everyone feel like fashion experts left its customers mourning their loss.

A mix of what I got and liked in the store | Beauty finds were the best!

The Future of Retail

The fall of Barneys was hardly an isolated incident in the current picture of retail. Coresight Research identified the main reasons behind the retail bankruptcies in the past two years as the inundation of the physical retail space in the United States, changing consumer trends, burgeoning e-commerce sales, and rising debt among retail companies, all of which are still evident in today’s market.

Modern shoppers are more interested in strolling through online stores and home deliveries than spending an entire afternoon popping in stores to stores. The rise of local and independent designers also marks the future of fashion. In the future, department stores might play the role of showrooms while online shopping leads the sale. The full-service luxury stores are becoming obsolete, which is why Harrods, which operates a single store in London, or Bergdorf Goodman (part of Neiman Marcus Group but operated independently), with its iconic Fifth Avenue store and a small men’s store next door, are the “true destinations” now.