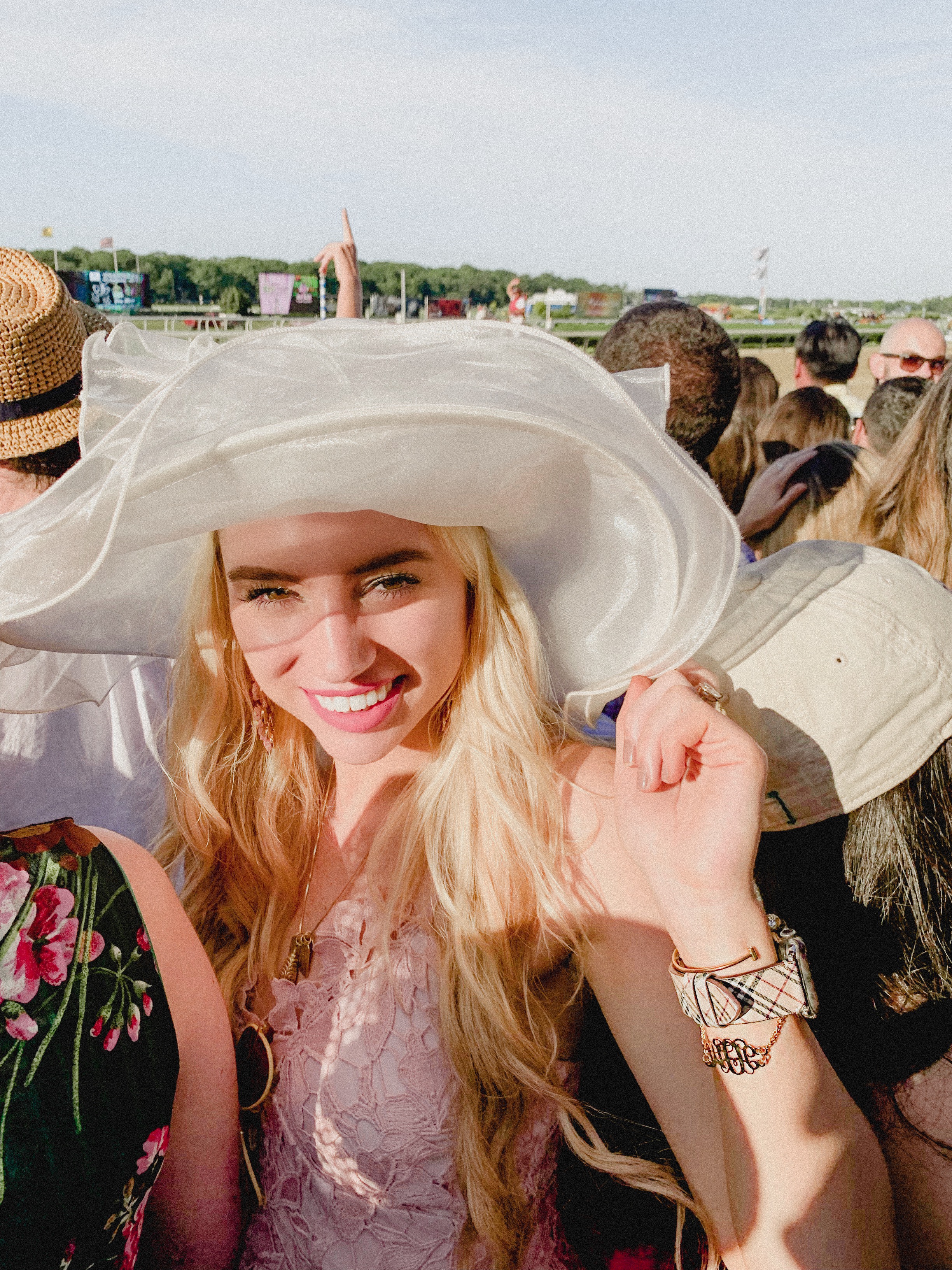 The Belmont Stakes takes place in New York in the Spring and Summer seasons. One of my best friends that went to High School with me in Minnesota (that now also lives in New York) has a friend that she met abroad in Europe that happens to live a short ten minute walk from the Belmont Race Track. His name is Nic, and he was hosting a before and after the races gathering in his backyard. Getting there from Penn Station was a struggle for us. We did not look at the app to see that we needed to transfer trains, so part-way through the ride we realized that the location did not seem right. Thankfully we were not terribly far from his house, and we called an Uber.

Once we got to the backyard I felt like I was on an episode of Southern Charm. This was no typical New York City site of a sea of black and grey apparel. Color engulfed the backyard throughout the colors of everyone’s apparel. From bow ties to salomon suit jackets, and Lily Pulitzer prints, we were all ready for the horse races. We all socialized and played drinking games until it was time to go see the race.

If you are interested in going to see a race yourself, check out the Belmont Stakes racing Festival calendar here.

I had never been to the races before, and did not want to turn down an opportunity to finally wear my cocktail derby hat…. maybe next time I will sport a fascinator. This hat had been sitting in my closet for about a year and a half, so it was definitely time for this hat to see the light of day.

Once we got in it was time to make a bet. I did not do any prior research on the horses so I was just going off of what I had heard. I even asked the woman working the betting window if she had any recommendations or knew who was projected to be #1 or #2. The woman was not amused and did not give me an answer. She just told me to hurry up and pick one. My friends boyfriend had mentioned the name Sir Winston, and I had seen his name on the TV at the gym earlier that day as well. Not knowing what the other horses names, I decided to allocate $60 out of my $80 on Sir Winston and then the remaining $20 on a random horse- Everfast. Nic decided to bet $2 on the Sir Winston as well, he wasn’t really planning on betting.

We went down to watch the race in the beating sun. This was perfect racing weather. It felt like it was taking forever for the race to start, but once it did start it was over in a flash. I was pretty tipsy by then, and slightly blinded by the sun. People around me were screaming that Sir Winston won! I was so ecstatic that my random choice would result in making a profit. Your earnings are determined by how the large the total pot of money was.

WE HAVE A WINNER! Once I got up to the counter, my $60 bet was now worth almost $700. After that moment I then understood why some people have gambling addictions. The rush of making that much money in a short amount of time does not disappoint.

After the race we went back to Nic’s to celebrate. There was actually a school bus that took us back to his neighborhood. I ended the night drinking way too much, getting back on the train, and then taking a cab home from Penn. Twas’ a good nights sleep.

I’m on Hearst Tower! With @Trench