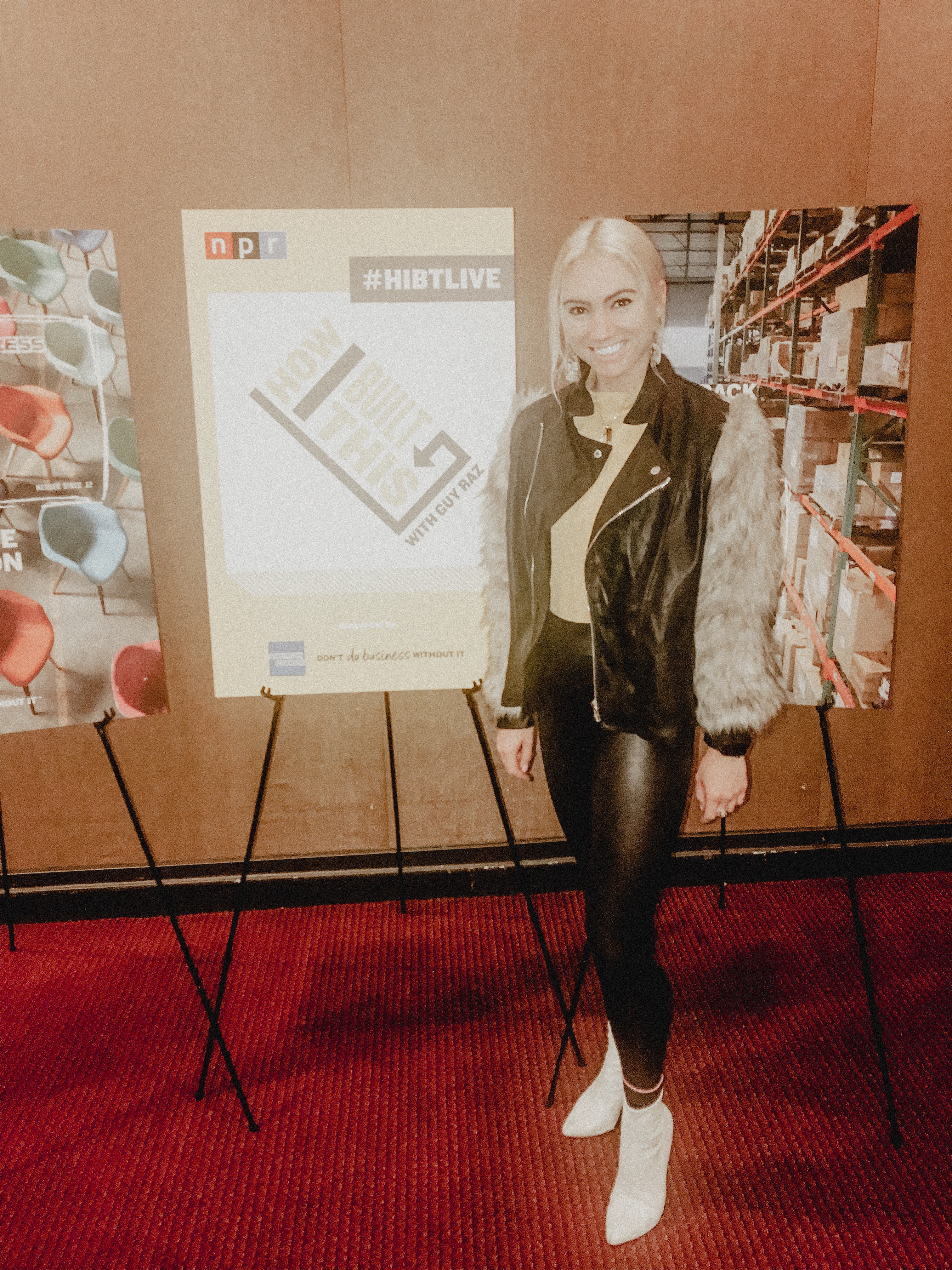 NPR How I Built This: Emily Weiss of Glossier

· That is the thing with beauty, very rarely will you come across someone who religiously will only use one and only one brand of products for their entire lifetime. ·

Emily Weiss managed to start her company with only one main investor (a female VC) to be exact. Only 6% of Venture capitalists are women.

A friend of mine is an avid podcast listener and recommended one of NPR’s podcasts to me: How I Built this. After a few episodes, I was hooked. In a matter of 2 weeks, I had already listened to almost every podcast that they had online. So what does “How I Built This” feature in each podcast? Entrepreneurs.

After hearing the mixture of passion, luck, and hard work of various entrepreneurs I wished that I could just get up and quit my job to start something new. The tapings of these podcasts happen all over the U.S., but only a handful are with a live audience. A majority of the live tapings are in Los Angeles and New York. I was ecstatic that a recording of one of the podcasts was not only in New York but also for a company that I personally had purchased before and was

Guy Raz is the man behind this podcast. He will have a script of questions to help moderate his conversation with each entrepreneur. But ultimately the conversation can take any twists or turns that the guest of honor leads it to.

The beauty industry is currently worth $450 billion dollars and is projected to grow to $750 billion within the next 6 years. A large portion of this growth stems from the growth and influence of social media. Personally, I am amazed every time that I see someone curating a new beauty, skincare, or hair care brand due to the fact that so many already currently exist. Emily made a great point early on in her interview relating to how she managed to stay afloat when bringing a new beaut company into the already saturated beauty market. She said that currently in her bag there are at least five different lip products and that she doesn’t plan on consolidating them anytime soon. I think back to what is in my bag and my many buckets of beauty products at home- she makes a good point because I do not have a specialty curated product selection, there are various products with very different price points.

That is the thing with beauty, very rarely will you come across someone who religiously will only use one and only one brand of products for their entire lifetime. Although the Kardashian-Jenner’s are always promoting their own make-up on their faces, I doubt that their glam squad only carries that single brand with them. Although a brand does always appreciate a sense of loyalty to keep their consumers coming back and buying more time after time, all they also need is a constant influx of new users. At the end of the day, a unit sold is one less unit of aging inventory that you have to worry about.

How it all started: The early spark for Glossier
Emily was babysitting her neighbor’s children one night when she was in high school, and the father of the children happened to hold a pretty high up position at Ralph Lauren Headquarters in NYC. She was half joking when she brought up not wanting to watch his children for forever, and prompted wanting an opportunity to work in corporate retail. On the spot, he then offered her an internship for the rest of the summer. Emily was shocked, and also was not going to say no to this. Throughout this internship, she worked long and hard, and surprisingly was very excited to eat a $1.00 hotdog off of the street each day. This internship opened doors for her, and later on in her career she landed a job with Vogue.

During her time at Vogue, Emily was also developing her own website called Into The Gloss, (which is still a major publication today). Essentially this website consisted of finding out what was in a personal space of everyone’s bathroom: their medicine cabinet. At one point she had landed a major deal for her blog worth $5K. This was a spark to her that she could really get the ball rolling and make this a full time career. She no longer wanted to just look into what products people were using on a daily basis, but instead create what she knew was missing in the beauty world. After moderating hundreds of interviews with women of various ages, she had a wealth of knowledge of everything beauty and skincare.

Knowing that she already had a customer base for her DTC business idea, Emily found a lab in California to create her products. Her initial reaction to this lab was fear. They were in a location that she said she pictured a tumbleweed rolling across. Once walking in the lab, the main chemist was this macho muscle man. Although he did not look the part, he was a super passionate man who helped them curate each Glossier product. I feel as if these podcast episodes always make it sound easy to get from a broke kid working 20 hours a day, to a millionaire with thousands of employees. Although every entrepreneur has their own path, timeline, starting point, and the decision to ever sell their company one day, they all have one thing in common. A true work ethics. No company ever snapped together without some hiccups along the way. If you want to hear more detail of how everything came to be, listen to the entire podcast!

Emily Weiss managed to start her company with only one main investor (a female venture capitalist) to be exact. 6% of Venture capitalists are women according to Emily’s researcg, and the odds were against Emily once all of the male VCs started backing out. Kristen Green has a strong suit when choosing new partners. Her internal “gut check” and data backed information from funding Warby Parker, Bonobos, Away, and Jet.com. Kristen knew that Emily was onto something with the fact that she was already starting with a customer base, whereas most companies start with a product or service, and later hope to build a loyal customer base.

Glossier immediately took off in 2014. Influencers and beauty gurus could not get enough. The very simple and eye catching packaging, simple “no make up, make up” and splashes of pink were selling out left and right. Today in 2019 Glossier is considered a unicorn of a company. It is valued at $1.2 billion and growing. Kristen’s $100 million dollars stretched far.

OPI Pop Up: Passport to Color